My Ass Meets The “Boss”

The 30th of July started early, leaving from my home town Vryheid, to pick-up Joe from the airport in Johannesburg. I was excited as I really enjoy Hunting Buffalo and Joe was looking for a great Bull which made it more of a challenge.

Day 1 We were up early on the 31st and met our tracker Josef, to start Joe’s Buffalo quest, for the next seven days. The area where we were hunting is 10000 ha, so there was a lot of ground to cover and a lot of Buffalo to look at. The first day we drove around a lot, to familiarize ourselves with where the herds were. Looking for spoor, looking at waterholes and looking at Buffalo we saw that day. In the first herd I spotted a nice old “Dagga Bull” and some others too. We had seven days, so we were not in any hurry.

Day 2 The 1st of August, saw us back early and we decided to look up on top of the two or three mountains, where I had seen good Bulls away from the herds before. Due to the bad drought we are having in South Africa there was no water up there and there were no fresh signs, so we moved back down to the flatter areas and checked a few more waterholes and other Buffalo on the way. Near from a waterhole we found fresh tracks crossing the road and decided to follow. The tracks were of three Bulls, two younger Bulls and one bigger mature bull, from what I could tell by their front hooves, bigger older Bulls always have bigger front hooves to support their big necks and heavy horns.

We tracked these three bulls for two to three hours, but could not get close to see them and then they must have heard us or winded us and began to run. So we decided to call it a day.

Day 3 2nd of August. We were back bright and early and quickly found a big herd spotting an older maturer bull, deciding to get closer and have better view.  The Buffalo were in a clearing about 800 yards away as we started our stalk, they suddenly all took off in a big cloud of dust and we noticed four bulls went off in a different direction. We followed them, hoping the bulls we were looking for was one of the four.

The Bulls climbed a hill side so we tried to get in front of them as they were moving fast and fearless, they winded us and took off down hill again, we also ran down parallel to them and saw them cross a road, the last bull was indeed the Bull we were looking for. The Bulls disappeared, we climbed higher ground to try and see them again, but no luck.

We then decided to follow the spoor and track them down, from where they crossed the road earlier. We got all our kit ready, loaded our guns and set off on the spoor.

The four Bulls really went a long way, the first half an hour, the spoor showed they were running. They settled down to a steady walk and were heading to the remote part of the concession. I knew of a spring/waterhole, in the thick bush was not to far away, where we suspected they were headed, on our final approach of the spring, we disturbed two Nyala bulls and they ran to the water. I suddenly heard water splashing and heavy hooves in the mud, as the Bulls fled the scene. We rested for 10 minutes and decided to follow on.

It was getting hot and tough going in the thick Sickle bush, up and down dongas (draws) and small hills. About an hour later, with no sign of the bulls resting, they entered some really thick cover and from their dung, we agreed they were about half an hour ahead of us.

I looked at Joe and could see he was tired and I explained if we catch up to them in this thick bush, they would either hear or smell us before we see them, or we would not be able to pick the right bull in the thicket. We decided to go back to the car, which was now brought forward and restrategize our plan. After a rest and some drinks, Josef (tracker) and I decided to go back on the spoor without Joe for a short while to get a direction or come to a road as to catch up with the Bulls further down the road. This is when I made a big mistake and left my 378-weatherby in the truck, thinking the Buffalo were long gone. Josef and I had been back on the spoor for about 100 yards staring at the ground when suddenly we heard a noise and looked up and 20 yards away a Buffalo Bull was coming at us, full charge. At that moment I knew we were both in big trouble. Josef spotted a small tree to his right and we both shouted hoping to stop the charge. I started to run away as the six foot sickle bush trees would not work as a getaway. I glanced over my shoulder and the Buff was two meters away. I clinched my teeth and waited for the impact. The Buffalo threw me high in the air and I remember landing on my head and shoulders, seeing stars! I felt him hammer me again, I think then I passed out for a few seconds, cause the next thing I remember is I was flat on my back and he was standing next to me, two feet away, breathing heavily.

I could hear Josef clapping his hands and shouting. The Buff turned and disappeared as quick as he appeared. Every body asks me what was going through my head? Did your life flash before your eyes? Honestly, there is no time to think, the only thing I remember thinking is “am I going to live?” 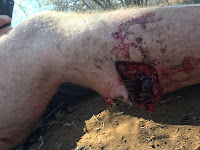 I sat up fully conscious. I had no pain, but felt immediate pressure on my left ankle and my boot was gone. I did not try to stand. I still had my radio with me and called for help. I started feeling around for injuries, I was bleeding on my forehead and felt pain on both sides of my ribs. I pulled my shirt up and luckily there were just marks from his horns, but no deep punctures.

My right leg felt funny, but no pain. I looked down at my jeans and there was a big hole in them, where my calf is. I pulled the jeans up and to my horror, there was a big hole in my calf, where the Buffs horn had gone straight through and then ripped out. I slowly lowered my jeans back down, I found my cellphone in my pocket and phoned Debbie (my wife) and told her I was in trouble and could she inform my medical insurance and told her I was still alive. We quickly bandaged my calf and I was raced to hospital, 2 hours away. The last 10 minutes in the ambulance was not fun and I was in and out of consciousness.

So after I was dropped at the hospital the other outfitter and Joe went back to the “crime scene” to go and hunt the Buff, as Joe and him were both angry. They then discovered that the Buff had turned and stood where I was lying, he had rubbed all the bark off a small tree nearby.

They also discovered that the Buff had stayed behind there and waited for us to return on the spoor before the attack. The other three Bulls had carried on walking away. He stood in one spot for about half an hour and had cleared a circle, waiting in anticipation. He was found later that afternoon, but Joe could not get a clear shot, low and behold it was the Buff we wanted to shoot all along. The next morning, on August 3rd, Joe hunted and shot the Buff. He was delighted with a great trophy and to get some revenge.

I had broken my left ankle and the surgeon operated the next day and secured it with 3 screws. Over the next ten days I had two operations on my right calf, as a lot of my calf muscle was torn off. The wound was left open with a vac machine pump attached to avoid infection. Joe was kind enough to come see me in hospital before he left to go home. I spent ten days in hospital and six weeks in a wheelchair. As I write this story it is now eight weeks and today is the first day I put my shoes on and tried to walk again.

My calf has healed amazingly from a big hole to a lined scar. My left ankle just came out of its boot and is getting stronger by the day.

So two questions to be answered…

Others say; the Buff left me when I lay motionless on the ground.

Out of every mistake or accident or any positive or negative situation in life, we as humans, must always learn from them and improve next time.

What I learned from this situation.